Released at the London Super Comic Con this coming weekend ( March 13-15 2015) is a graphic novel collection of Amongst The Stars :


Aliens have nightmares too. Us!
Amongst the Stars tells the story of an alien race reaching out to planet Earth, but only with its collective mind. But for the aliens, too late, mentally it proves a crippling experience, where Earth drags them down to a level they don’t want to go and cannot escape from. They are trapped in something akin to a horror movie.
Everyone on Earth remains blissfully unaware of this alien intervention, or do they? Can we somehow help save them? It's in the back of our minds. 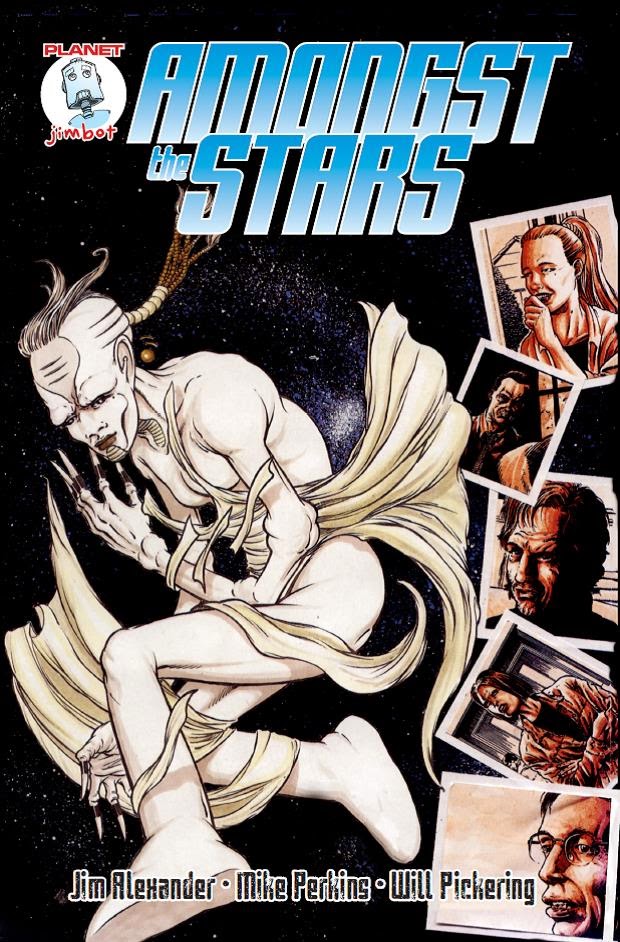 For this new collection I penned an introductory prologue :

I illustrated Amongst The Stars during the beginnings of my career so I beg your indulgence in excusing any compositional inconsistencies contained within but I assure you that you won’t have to do similar with Jim Alexander’s writing though.  His scripted science fiction adventure was simply phenomenal from the very first moment I came across it.


There are numerous facets about Amongst The Stars that intrigued me – not least of which was the literally universal scope of the fanciful ideas and perfectly constructed execution. The obvious thought process that had gone into creating such concepts and characters made me look at Jim’s writing in a wholly new light and I had already greatly admired his writing throughout his thought provoking run on Calhab Justice…but this was simply an awe-inspiring and accomplished achievement.


Amongst The Stars remains a project that I’m still incredibly proud of and I maintain that it can continue to enkindle admiration and spark fascination to this day…and will endure perpetually.
Reviews of the comic are available to read here: