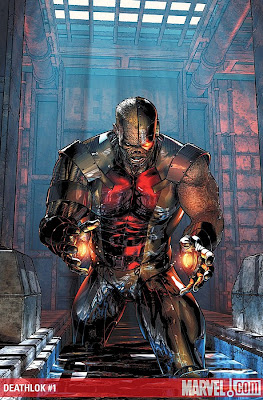 I've been a massive fan of the concept and character of Deathlok for an eon and am glad to say that a new series - featuring the "Demolisher" version of the character rather than the "Pacifist" version - hit the stands last week. Written by the truly talented Charlie Huston and illustrated by Lan Medina this is The Deathlok I've wanted to see for a long, long time ; set in the future with harsh warfare and biting satire of both the corporation culture and reality television. I've been lucky enough that I've read the entire series in script form and I am loathe to say that THIS is the Deathlok I would have LOVED to have illustrated...and I was almost there... but then The Stand reared it's lovely head and set it's sights in my direction...who could resist?!! Anyway - here's a look at one of the interior pages and character studys I produced while the book was under consideration. Enjoy: 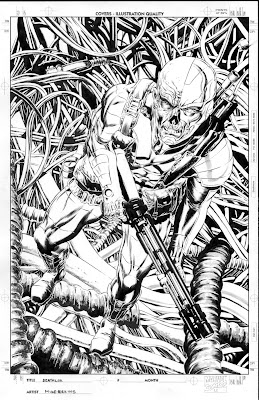 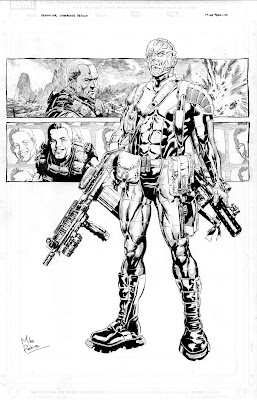 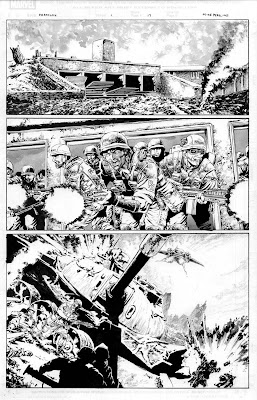 And just to prove my lifelong love of the character - here's a Deathlok illustration from wehn I was 7 or 8 years old!! Hopefully, I've improved a little. 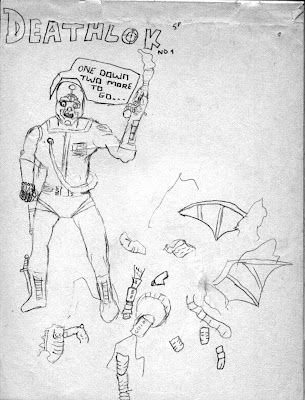 JC said…
I have hope! I recently drew something similar to the bottom pic--so I should be able to get to the others eventually, right?

Josh said…
That is ridiculously good for a 7 or 8 year old. Look at your anatomy. Especially on his left arm. Plus your use of varied fonts is quite impressive. I hope you keep this in your portfolio.

I bet 8 year old you would be totally jealous of your life. You draw comics for a living and get to eat ice cream whenever you want. Being an adult is kickass.
November 12, 2009 at 4:03 PM

JC said…
Thanks for the heads up on this mini--2 comes out this week. The writing is great, as judged from a single issue, and I find Lan Medina's art enjoyable. I think the coloring could be "softer", but I know your pages are difficult for colorists to handle as well. Hoping for a long-term run, but probably unlikely...maybe after the Stand (which hopefully will never end) it will be one of your new gigs. Still coveting...
I am no longer impartial.
December 7, 2009 at 5:48 AM