Adding to the pencils


Every now and again you may be approached by your editor to not only ink a project but to “finish” it. Don’t panic. He’s not asking you to hurry up as you’re fast approaching your deadline. He’s not even asking you to color, letter, edit and print the comic. What this means is that, for whatever reason – whether it be time constraints or the certain strengths of a particular penciler – you’re being asked to, essentially, strengthen up the pencils in your inks. Sometimes, you’re being asked to have a hand in the actual finished style of the job in hand.

If you’re being invited to do this you obviously have enough confidence in your own abilities that your editor has noticed that you’d be able to handle it, no matter how complete the pencils are – and sometimes you’re given very little to work from.

To illustrate this welcome predicament let’s take a look at one of the pages from Captain America #10 which I finished over Lee Weeks’ always strong pencils. 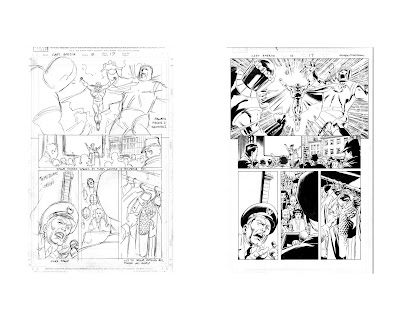 As you can see from the penciled page all of the basic information is there it just needs a little more depth and refinement. It’s up to you as in inker to determine how much refinement you feel is needed. There are some projects that are given to particular inkers so that their own style can shine through. The inks of Kevin Nowlan being a perfect example. Unless I’m specifically asked to take this approach I usually try to go in a different direction when I’m offered such an undertaking. I’ll try to take a look at the pencilers previous work – in particular something they
were pleased with or something they inked themselves. By doing this you’re probably on the fine road to less friction with the penciller – they’ll also want to work with you again in the future.

The first panel we see on this page is pretty much presented to me as shapes with a little more detail on the Magneto figure. If it was inked line for line you really wouldn’t be able to figure out what the giant figures are and the power of Magneto’s attack would be non-existent. This is where a little bit of research comes in handy. It’s now your job to go and find out what a sentinel looks like – don’t just rely on your hazy memory of a comic you read a few years ago.

Figure out where your lighting is going to originate from. In that first panel I’ve actually used the figure of Magneto as the power source, utilizing a central shadow to show the magnitude of the force emanating from within him. I’ve also accentuated the flow and ripples of his cape to lead the eye towards the focal point. This lighting is then followed outwards to the now metallic figures of the sentinels with the foreground figure capitalizing on the foreground placement by being the darkest element on the page to give the perception of depth.

Further power is underscored by the radiating lines – once again pointing to the focal point of Magneto – being cut into by the electrical affect achieved by using a white-out pen or white ink.

The next three panels consist primarily of a crowd scene in a New York street. In the pencil version shapes are indicated in order to establish figures and faces. The buildings are represented as basic boxes with rudimentary windows. Do NOT draw this! Finish it!! Look at life. Look at photos. Study the fall and texture of clothing. Put the most prominent shadows in the foreground and drop those buildings back. Add more figures if needed to give the crowd some substance (as you can observe
in panel 4). Think about where you’re adding the blacks – your page has to flow, it has to be composed, those solid blacks need to balance the page and lead the eye.


The final panel – although simply a hand reaching into a wardrobe must be approached with the same kind of commitment and drama as the other panels otherwise the whole page could fall apart at a glance. Add that depth with shadow and give those clothes a few more wrinkes especially where the hand is grabbing the jacket. The wrinkes on the shirt sleeves of both the arm and the arm of the jacket lead the eye to the action.

When finishing a job in the inks follow the pencilers intent. It’s similar to the relationship of a director and a director of photography or cinematographer -all of the storytelling is there, what you need to do is add the drama and depth.