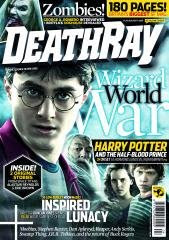 People of Earth!
Rejoice! A new Death Ray awaits you and your visual organs in your nearest news outlet, and it is a mighty one indeed.

Firstly, Death Ray #20 is so packed with magical teens it risks thaumaturgical disassociation as takes you behind the scenes of Harry Potter and the Half Blood Prince, where we treat you to interviews with Daniel Radcliffe, Rupert Grint, Emma Watson, new wizard tutor Jim Broadbent and director David Yates! Then we board the Death Ray lunar express for a trip to the Moon, or at least Shepperton, where we take an in-depth look at how Earth's satellite was remade by cunning effects men for Duncan Jones' retro SF feature, Moon, and speak to the director himself. Also on the space front, Stephen Baxter, bard of grand cosmic operatics, reveals his influences in the Death Ray interview.

Magic and the final frontier, two flavours of awesomeness for you, but there is a third, slightly more rancid, strand – horror! Death Ray suffers a major zombie outbreak this issue, with minor infestations in the features and book sections. Who other could we turn to to aid us in our hour of need than George A. Romero, wellspring of the entire zombie apocalypse genre? With zombies and a look behind the scenes at scary effects from Reaper and Supernatural, we've got all three points of the fantastical genre triangle covered this month.

Get an insight into comics with DC's creative head honcho, Dan Didio, and a look at the work of up-and-coming comics artist Mike Perkins. Sneak into the minds of Dan Akroyd, Anton Yelchin and Andy Serkis in New Gods, read in reverent silence as SF luminaries (and the Death Ray team) climb upon the giant soapbox of Deep Thought, uncover the secrets of our lunar neighbour in The Ten Minute Guide… It's all too much! Remember too that we are the only multi-media SF magazine to publish short stories, and this issue we have two original tales from Alastair Reynolds and Eric Brown!

This impressive list is but the barest spectrographic survey of the galaxy of entertainment that awaits you. To truly sample its multifarious delights, you will have to make a lengthy trip within yourself. £4.99 is but a low fare for such a voyage!

Death Ray #20 is out in all good newsagents now.