A QUESTION OF TASTE 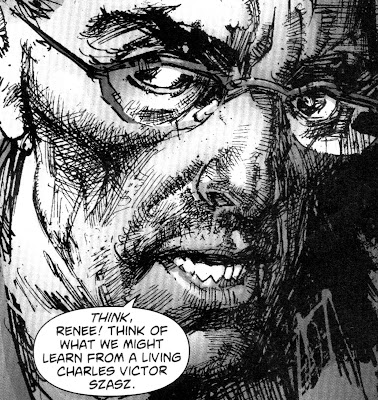 Yes, I'm an artist, but I don't usually buy a comic based on the artwork alone. I follow writers more so than pencillers, and even then I don't pick up everything a certain writer may produce. I'm more inclined to wait for the trade collection on certain titles - and, again, this comes down to the writing. Saying that, though, there has to be a marriage between the writing and the illustration. Poor artwork can seriously drag great writing down.
Anyway..as I was saying... I don't usually buy a comic based on the artwork alone but, as I was flicking through a few new comics yesterday, I came across the Blackest Night tie-in issue of The Question and was simply blown away by Bill Sienkiewicz's inking on the title. I haven't been following the Blackest Night storyline and, although I'm well aware of all the players involved and have the highest respect for all of them, Mr. S's scratchy line-work just made that title sing.
A beautiful book.

Jim Campbell said…
Pants! Is the Cowan/Sienkiewicz issue of The Question out already? Quick, Batman, to the comic shop!
February 4, 2010 at 11:00 AM