A couple of years back I wrote a chapter on inking for Andy Schmidt's book - The Insider's Guide to Creating Comics and Graphic Novels - which is available to purchase here: http://www.amazon.com/Insiders-Creating-Comics-Graphic-Novels/dp/1600610226/ref=sr_1_1?ie=UTF8&s=books&qid=1282508161&sr=8-1

Over the next couple of days I'll be re-presenting some of the individual subjects here:

On the comic book page the creator is fundamentally working in a two dimensional environment – attempting to visualize a three dimensional world. Sometimes, due to the imaginations of the hardiest of writers, the artist is also called upon to work in a multi-dimensional tableau – but let’s just stick to the basic three for now.

The penciler will most likely turn in pages that lack line weight and depth. It’s the inker’s job to bring a certain amount of depth perception to the pages provided. This can be attained by utilizing various approaches, sometimes depending on the subject matter and the desires of your penciler. One of the most widely employed techniques is concerned with going from using a thick line in the foreground to a thin line in the background. The inker can also darken the figure or fixture in the
foreground leading to a shadowless background. Both techniques are viable.

For another approach let’s take a look at one of my Captain America pages and see what techniques and tools I’ve used to give a little depth. 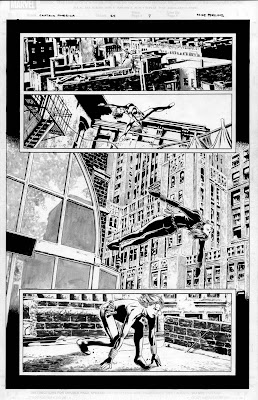 The script required a page of Black Widow bounding , leaping and jumpingthrough a cityscape. By necessity this would be a highly detailed page and if the inker is not careful the figure and surroundings could easily mould into one mass.


PANEL ONE : Black Widow is leaping forwards and upwards in this shot towards the reader. In order to make sure that she doesn’t look as if she’s just standing on the roof ledge I decide to make the most of the grey techniques I had been using throughout my run on the title. By using a combination of tools the depth perception became that much more pronounced. A Prismacolor black pencil gave a grey texture look to the brick work. Above this brick work is a flat plain weathered by using a grey wash. To make sure that the background plain was prominently in the background a little bit of “flecking” was introduced by scratching away at the greys with the exacto-blade exposing the white page beneath. These kind of approaches enforce the separation of planes.

PANEL TWO: Now we see the Widow jumping from the ubiquitous New York water towers. Again this depth separation is required and shown by using various techniques from the grey wash on the towers to the distant water tower in the far background – illustrated by employing the use of a lighter, smoother black pencil. There are very few solid blacks in this environment. They are used sparingly on the figure itself and also on the wall underneath the towers to balance out the panel.

PANEL THREE: To separate all of the clashing planes in this panel the penciler ( in this case myself) has used a rim-light effect on the prominent figure. By doing this Black Widow “pops” forward a little more and doesn’t bleed into the surrounding buildings, This is a method of utilizing shadow in an effective way that, most often, the penciler will provide – but sometimes not. As an inker it is your job to make sure that all the information on the page is portrayed clearly and adding shadow to certain planes and people will emphasize the prominence of the particular element.

A good knowledge of anatomy and an understanding of the structure of real world surroundings is not only the responsibility of the penciler. It is most important that you educate yourself in these essential aspects.

Again, for the background elements, I ended up using a combination of grey wash, Col-erase pencil and, in this particular scene, just an ordinary 2H pencil.

PANEL FOUR: Lots of chimneys and rooftops in this panel - a lot of ways for this panel to look completely flat! I ducked that particular problem by making sure that the foreground bricks on the chimney were solid black with the background chimney bricks worked in with the grey wash. The other building in the top right of the panel was given that hazy quality by availing myself of the Col-erase pencil once again.

PANEL FIVE: Just a completely solid portrait shot of The Black Widow using a lot of solid black on the back and side of her face so that, even though you can not see the city she is looking out at, she’s still part of the environment. The colorist can also add depth to a page but do not concern yourself with this. It is the inkers job to differentiate the depth and seperate those planes.