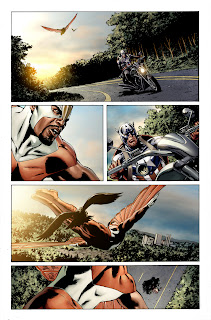 Over the past three years I've been jumping around the Captain America title - totally enjoying myself. Starting off inking Steve Epting, then Lee Weeks for an issue, I continued to ink pages of Steve's and then progressed to pencilling and inking my own work on the title ( some pages of which are still available to buy if you check out the link to the right which takes you to http://www.comicbookartgallery.com/ ) . Throughout my time on the title I've also been working on other comics at Marvel including Union Jack, Annihilation:Conquest, X-Men:Endangered Species and House of M:Avengers amongst others. After a brief return to Cap, inking Butch Guice, pencilling and inking half an issue and, now on #38, inking Steve once again, I'm moving on to pastures new....soon to be announced.

Working with the editorial team of Tom, Molly, Aubrey and other Tom has been a very fulfilling experience. Working alongside the other artists has also been fantastic... but more then anything, getting the chance to work with Ed Brubaker and Frankie D'Armata has truly been wonderful... and something I'd dearly like to repeat in the future.... maybe on a Wolverine arc of 50 issues or so!! Now THAT would truly kick arse!