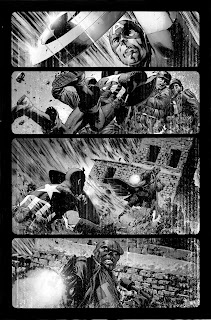 Link : http://blog.newsarama.com/2008/05/22/captain-america-movie-will-be-set-in-world-war-ii/
Now THIS I'm pretty pleased about. I reckon the majority of any initial Cap film should take place in WW2 - if only to show his origin. Yet, we also need to sse that Steve Rogers is a different kind of man. He has a moral structure inherent to the era he grew up in - namely the Great Depression - and one of his most intriguing character aspects is "The Man Out of Time" dilemma.