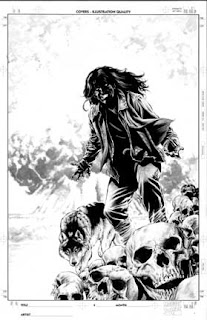 So...now it's official!! I can finally talk about it!!
As announced at the WizardWorld Philadelphia Convention, I'll be illustrating Marvel Comics' adaptation of Stephen King's THE STAND - collaborating with writer/dramatist/raconteur Roberto Aguirre Sacasa. To say I'm stoked and excited about this is a massive appliance of understatement.
THE STAND is widely considered by his loyal readership as THE King novel - encapsulating a lot of his recurring themes and utilising the connecting thread of The Dark Man - The Walking Dude - Randall Flagg who crops up, in one form or another, throughout a lot of his books.
I'll be introducing my versions of the different characters in the novel in further posts and I'll be keeping you up to date with sneak peaks. As for now...follow the links below for more in depth coverage of the announcement :

Looking forward to seeing the book when it comes out.
(I dunno why no one has posted a comment here yet!)