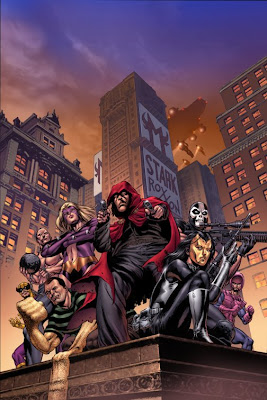 HOUSE OF M: MASTERS OF EVIL #1 (of 5)
Written by CHRISTOS N. GAGE
Penciled by MANUEL GARCIA
Cover by MIKE PERKINS
Hot on the heels of the last two acclaimed minis, House of M returns! You've seen how the mutants and the heroes were changed in the world ruled by Magneto...but what about the villains? Their story stands revealed at last as The Hood assembles a gang of the deadliest Sapien super-criminals: Madame Masque, The Absorbing Man, Titania, The Wrecking Crew, Nitro,Constrictor, The Sandman, Crossbones and more! At first, their goal is simple: get rich and get away with it. But their very first job may lead somewhere none of them expected...and incur the wrath of the House of M itself!
32 PGS./Rated T+ ...$3.99 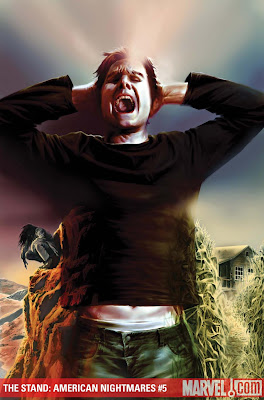 THE STAND: AMERICAN NIGHTMARES #5 (of 5)
Written by ROBERTO AGUIRRE-SACASA
Penciled by MIKE PERKINS
Cover by LEE BERMEJO
Variant Cover by MIKE PERKINS
Sketch Variant Cover by LEE BERMEJO
It's the Fourth of July, the first holiday post-plague, but none of the survivors are celebrating. While Nick Andros hovers between life and death--and between the influence of Randall Flagg and Mother Abigail--Larry Underwood makes a shocking discovery in his tent... And Stu Redmond's path intersects with Harold and Frannie's, but immediately a conflict (that will have enormous ramifications for all our players) immediately erupts among the three. The second mini-series adapting Stephen King's horror epic ends here, True Believers, setting stage for Volume Three: "SOUL SURVIVORS."
32 PGS./Cardstock Cover/Parental Advisory...$3.99
(c)2009 Stephen King. All rights reserved.
Published by arrangement with The Doubleday Broadway Publishing Group, a division of Random House, Inc.
This graphic novel is produced under license from The Doubleday Broadway Publishing Group and Stephen King.

JC said…
Exceptional cover for the House of M mini. The HOM Avengers mini you did with Mister Gage is one of the great arcs of all-time (yeah, I know, very limited perspective, but I was mostly a Marvel guy from the 80's on). I know you are completely wrapped up with stemming the tide of the Super Flu and those who would wreak havoc on our land, but another mini with Mister Gage would be an amazing adventure--especially with Avengers inclusion. Though, a Gage/Perkins arc of Guardians or Inhumans would be quite fantastic!
Have a great weekend.
May 22, 2009 at 8:48 AM