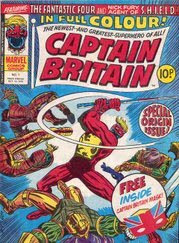 What I’ve decided to do is give you a run down of my earliest comic book influences – in stylistic approach, love of character, a career motivator or simply something I just picked up and loved.

I’d grown up on the Marvel reprint collected comics such as Titans and The Mighty World of Marvel but when Captain Britain came along it made me realize that, indeed, Britain could have her own heroes and maybe even British guys could draw their adventures, ( Okay, I know Herb Trimpe was illustrating it but I believe he was living in England at the time) Plus you got a free mask!

So – just imagine – a six year old Mike Perkins, running down the street dressed only in my Captain Britain mask and swinging my mighty staff – which, with a push of a button, could extend 10 feet!! I was overjoyed when you could get the amulets too!

great to see you around