Skip to main content
March 05, 2010
I was just wrapping up my inks over Steve Pugh on Superman vs Terminator when iI was asked if I'd like to try-out over the pencils of Rick Leonardi. I'd long been a fan of this fantastic artist and was overjoyed by, at least, inking a page or two of his. I subsequently got the job on the four issue Green Lantern vs Aliens and it still remains one of my favourite series I have worked on. Maybe it shows that I was so happy to be embellishing the flowing pencils of Mr. Leonardi.

Here's a Green Lantern illustration featuring one of the eponymous heroes who opened the first issue already "impregnated" by the Alien. He didn't last long...but obviously made enough of an impression for me to be commissioned to illustrate him once again : 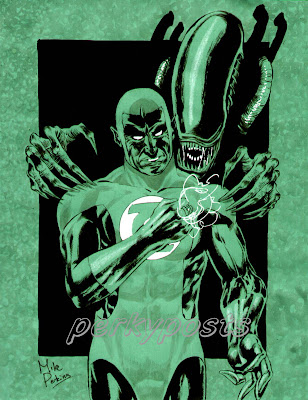 Unknown said…
Very cool mike! You know I still need to get you to do a Nick Fury commission for me.

Ron Marz said…
What a wonderful series! One of my favorites!